Radio Wizard: Most of the world looks at Electrical Engineers, Engineering Technicians, and Ham Radio Operators as boring and uninteresting fellows. In so many cases this is far from the truth, there are so many things that are never known. Here is the story of Arthur Collins, a boy genius, a man of unlimited measurable talent. He pushed the the envelope continually, his life was full of discovery, adventure, near death experiences, intrigue, and even many occurrences of corporate politics. One example described in this book is the big fight with RCA Corporation over the right to manufacture vacuum tubes. How different the world would have been if he (Collins Radio) had not won that fight.

“What probably was Arthur Collins’ most embarrassing moment in his flying career occurred with Wellan the pilot ant Arthur the co-pilot on a twin-Beech landing at Cedar Rapids. It came at the end of a flight test of the company’s’ steering computer then under development. Arthur, Wollan and three engineers were on board. At that time the levers in the Beech-craft which controlled the flaps and the landing gear were similar. They were located on the floor pedestal, easily reached by the pilot in the left seat and the co-pilot in the right. The gear lever was on the left side and the flap control lever on the right side. The landing gear of course had been lowered while the plane was on final approach to the runway. It was customary with the twin-Beech to raise the flaps immediately on touch-down to avoid a vortex effect of wind on the tail surfaces. Wollan brought the plane down to the point where the tires had just touched the runway but the weight of the aircraft had not yet settled on the landing gear. He told Arthur to hit the flaps

control lever. But, for some reason Arthur activated the landing gear lever instead of the flaps causing the wheels to begin retracting. Wollan said the engines were at idle speed by this time and he thought the plane was beginning its roll out down the runway. He said he first realized what was happening when he noticed the tips of the three bladed aluminum propellers beginning to curl up like rams’ horns. I cut the power and we skidded right on down the center of the runway until we stopped. It was relatively smooth and caused little damage to the underside of the airplane. He said. Everyone got out in a hurry and Art never said a word. You could tell he was really upset. Wollan said. But Arthur managed a wry grin about the accident a short time later when the company photographer arrived to take pictures of the damaged plane for insurance purposes, and the airport manager suggested Arthur pose with one foot on the craft in the manner of an African hunter trophy photo”.

Around 1960 or ’61, when the first addition was built on the Fabrication building west of C avenue, hard surfacing of the parking lot did not get completed before winter weather set in. The gravel base was a muddy mess with many large water filled potholes. Employees had to don rubbers and overshoes to walk between the buildings and where they parked, distances up to several hundred yards. Such a situation was not to be overlooked by the creative minds of a small group of office workers. Making a trip to an auto salvage yard in southwest Cedar Rapids, they acquired the roof of a Volkswagen bug automobile. Making sure the lot was free of any onlookers, they strategically placed the car top in one of the large potholes. The desire results of their prank soon unfolded. Another employee rushed into the building and informed the guard at the entrance that a car had been swallowed up by a pothole. A flurry of activity followed, with maintenance supervisors quickly arriving to look over the scene, until realizing a hoax had occurred. The hole soon was filled with a truckload of rock”

The two book excerpts from Radio Wizard are picked from the hundreds that are contained in this ‘Can’t put it down’ non-fiction work. Not only does it contain personally witnessed stories of Ben’s, but he has collected stories and antidotes from all around the world. Arthur Collins was a driven man, he was very difficult to work for most of the time, but he did so much to advance electronics, computers, switching phone systems that you will be amazed when you read about these and more. If you are a Ham radio operator, or someone that has interest in the art and science of Radio and all the other neat gadgets that help planes fly, or other things that you will only find out about by reading the book.

Innovation was demanded by Art Collins in every product emerging from his electronic laboratories, whether it was a revolutionary new aircraft flight director like the one shown here or the latest in a ham transmitter.

Amateur radio was very dear and very special to Art. He wrote the following copy for a Collins Radio Publication.

“We derive a lot of pleasure from our work, mainly because we are dyed-in-the-wool hams ourselves! And there is great satisfaction in receiving countless letters from users in all parts of the earth telling us they never knew what real hamming was until they installed Collins equipment. Such response gives us a genuine thrill and we feel amply compensated for the labor put forth in developing Collins equipment to it’s present and high state of efficiency and dependability“

Ben W. Stearns (1927-2013) had a journalism career in daily and weekly newspapers and in industrial public relations. He worked for Collins Radio Company and the Collins Radio Group of Rockwell International from 1962 – 77, much of that time as Public Relations Manager in the Cedar Rapids Division. In honor of this book in 2002 he was given the IEEE-USA award for Distinguished literary contributions furthering public understanding of the profession. 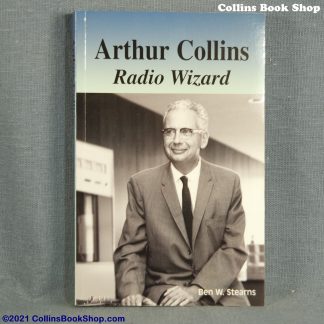